The fall ends five years of growth and is largely attributed to a loss of broadcast and matchday income because of the coronavirus pandemic.

Business services group KPMG found that the Old Trafford club’s “enterprise value” fell by 20% compared with 2020, seeing them slip to third in a table they topped in 2017 and 2018.

Meanwhile, Arsenal’s on-field decline contributed to their fall out of the top 10 clubs, while West Ham were among three clubs to be replaced in the rankings by newcomers Marseille, Atalanta and Fenerbahce.

However, the Premier League still dominates the study, providing eight of the 32 clubs listed and accounting for 39% of a combined 33.6bn euros valuation. 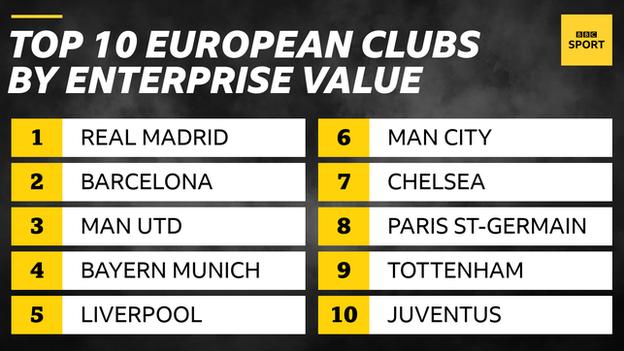 Manchester United, Liverpool, Manchester City, Chelsea and Tottenham all sit in the top 10, with the Gunners 11th, Everton 18th and Leicester City 20th.

KPMG says the enterprise value of a club is calculated as the sum of the value of the owners’ equity, plus total debt, less cash and cash equivalents and indicates what a business is worth regardless of its capital structure.

WP2Social Auto Publish Powered By : XYZScripts.com
Be the first to get updated with the latest entertainment, news around you, giveaways, deals and lots more.