A 29-year-old internet fraudster, Ademola Adebukola alias ‘Holy Ghost’ was on Wednesday jailed after he was guilty of four counts of cheating and attempt to cheat by a Kwara State High Court sitting in Ilorin.

Justice Adenike Akinpelu convicted and sentenced him to six months imprisonment on each of the counts after he pleaded guilty to the charges brought against him by the Ilorin Zonal Office of the Economic and Financial Crimes Commission (EFCC).

The sentences are to run concurrently from September 14, 2020. 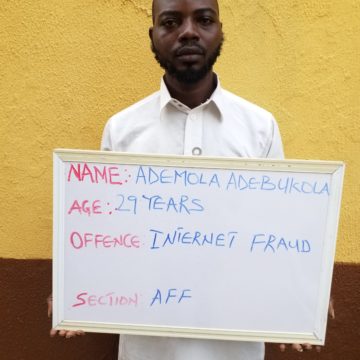 The court also ordered the forfeiture of the convict’s iPhone 5 and Dell Laptop, being the instrumentalities used to perpetrate the crime, to the Federal Government.

According to a statement by the anti graft commission, one of the charges against the convict reads: “That you, Ademola Adebukola, sometime in 2018, at Ilorin, within the Judicial Division of the Kwara State High Court while acting as Blackmore Scott a.k.a ‘Holy Ghost’ with email address holyghost643@gmail.com did attempt to cheat one Sherri Reed by fraudulently inducing her to deliver the sum of $3,500 to you under the guise of being in a romantic relationship with her.


Another count reads: “That you, Ademola Adebukola, sometime in July 2020, at Ilorin, within the Judicial Division of the Kwara State High Court while acting as David Frenchman with email address msccruiseworld@gmail.com did attempt to cheat by impersonation when you presented yourself to one Wanda Smith of as being a Caucasian male in romantic relationship with her, a representation you knew to be false and thereby committed an offence contrary to Section 95 of the Penal Code and punishable under Section 324 of the same Penal Code.”

Be the first to get updated with the latest entertainment, news around you, giveaways, deals and lots more.