We Joined IPPIS In Error, We Are Now Poorer Than Before – ATBU SSANU, NASU Laments

The Joint Action Committee (JAC) of the Senior Staff Association of Nigerian Universities (SSANU) and the Non-Academic Staff Union (NASU) at the Abubakar Tafawa Balewa University (ATBU) has lamented that the two unions joined the IPPIS in error.

The declaration was made by branch Chairman of JAC ATBU, Comrade Sulisma Jatau during the commencement of a 3-day protest by members of the unions over issues of salary differences.

He said that the two unions in the universities across the country with the exception of the Academic Staff Union of Universities (ASUU) joined the IPPIS in error, lamenting that joining the IPPIS has made them (members of the unions) poorer than they were.

He said that: “The two unions in the universities joined the IPPIS because we were deceived that it is a platform that will eradicate corruption and bring transparency to the salary payment system and sanitize it.

Sulisma Jatau further said that, “they promised us that that platform is flexible that it will encompass everything but to our dismay when we joined, we are now poorer than we were.” 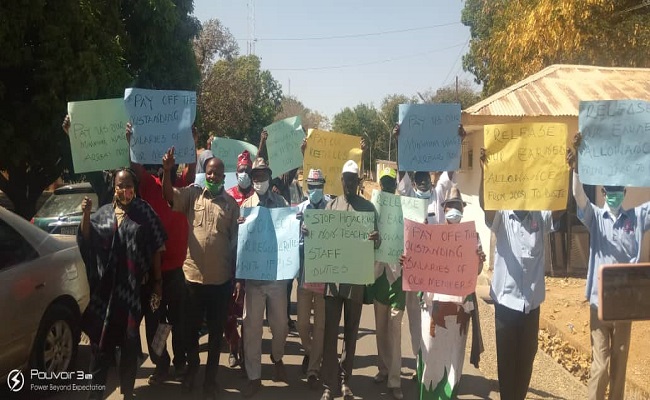 The JAC Branch Chairman, however, lamented that, “Our salaries are being deducted unnecessarily, in fact, for the past 11 months, every month, we have different salaries. So we discovered that for you to correct one anomaly, you have to go to Abuja, this is counterproductive. We now believe that that IPPIS is more corrupt than where we were.

During the protest on Tuesday, Members of the JAC embarked on the peaceful protest at the Yelwa Campus of the University to press home their demand for fairness in the issue.

Comrade Jatau, said that the two Unions decided to join in the three days protest to press home the eight demands put forward to the Federal Government for consideration.

Jatau further explained that the unions had earlier on signed a Memorandum of Understanding with the federal government on the issues since October 20, 2020 but nothing had been done for the implementation of the MoU.

The JAC Chairman explained further that the contending issues between the two unions and the federal government are: inconsistencies in the Integrated Personnel Payroll and Information System (IPPIS) payment; non-payment of earned allowances; non-payment of arrears of minimum wage; delay in the renegotiation of FGN/NASU and SSANU 2009 agreements as well as the Non-payment of retirement benefits of out-gone members.

He further added that, teaching staff are usurping headship of non-teaching units in clear violation of conditions of service and establishment procedures; neglect and poor funding of State Universities and non-constitution of visitation panels for the Universities by the Visitors both at the federal and state levels.

Sulisma Jatau added that, “We had to do this protest at this moment because of the announcement of the resumption of the universities, we have so many lingering issues on ground and as law abiding Unions, we don’t want to disrupt the calendar of the schools that is why we want the government to be very proactive and come to our aid and meet our demands before schools resume or else anything that happens we are not supposed to be blamed.”

He said that JAC met severally with the government which gave birth to the MoU they signed but to their dismay, up to this moment, nothing has been done.

While speaking on the pension arrears, he said that some of their members who retired two years ago are still being owed their entitlements saying, “We cannot compute the months of pension arrears owed our members because up to now, they’ve not gotten their entitlements. Some of the retired last year some of them even retired two years ago, most of them have nothing to rely on.

“We as members’ of these unions are also potential retirees and we don’t want what is happening to happen to us later when we retire so that we can have a smooth transition especially now that we are contributing to this pension fund. We don’t know what is holding the federal government from paying our retirees,” he added.

The JAC Chairman who said that after the expiration of their three days protest, if nothing was done, they will wait for directives from the national headquarters, however, pleaded with the public to intervene so that there will be rancor-free universities.

WP2Social Auto Publish Powered By : XYZScripts.com
Be the first to get updated with the latest entertainment, news around you, giveaways, deals and lots more.